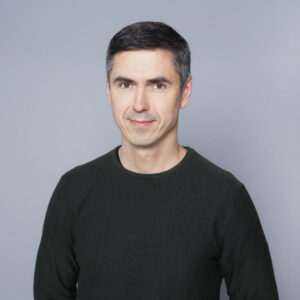 Urmo Kübar has been involved in Estonian civil society development throughout his career–as a journalist, as an activist, and most recently as the civil society adviser to President Kersti Kaljulaid. In 2005-14 he held various positions at the Network of Estonian Nonprofit Organizations, the national umbrella and advocacy body for civil society organizations (CSOs); including serving as its CEO for 7 years.

In 2014, Urmo was selected for the McCain Institute for International Leadership’s year-long Next Generation Leaders program. As part of this program, he worked with the Office of Advancement of the Smithsonian Institution in Washington, DC.

His main focus has been on promoting civic initiative and public participation, building a supportive environment for CSOs and strengthening their capacity, and encouraging philanthropy and effective altruism in Estonia.

Urmo joined Praxis in 2021, having previously participated as a co-author in some studies and as a project partner. He studied journalism and political science at the University of Tartu.

In his spare time, Urmo can be found working in his garden where he grows much of his food. He is also keen on hiking, dancing, and reading.